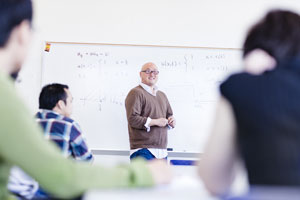 UC Merced's Applied Mathematics courses emphasize learning fundamental mathematics as well as its application to other fields of study such as biology, economics and physics. To that end, we emphasize learning mathematics conceptually and concretely by exploring topics analytically, graphically, computationally and verbally. Below we describe each of our undergraduate course offerings.

Lower division mathematics courses (e.g. pre-calculus and calculus) are required for many of the majors at UC Merced because mathematics is the foundation for many different areas of study. To help our students to learn mathematics as best as they can, our math instructors provide students a variety of experiences to learn mathematics through lectures, discussion sections, homework and various workshops. In addition, there is free tutoring available on campus through the Math Center. (Courses with * are currently not scheduled to be taught.)

Preparation for calculus. Analyzing data by means of functions (linear, quadradic, polynomial, logarithmic, exponential and trigonometric) and graphs with an emphasis on mathematical modeling of real-world applications.

Introduction to differential and integral calculus of functions of one variable, including exponential, logarithmic and trigonometric functions, emphasizing conceptual understanding and applying mathematical concepts to real-world problems (approximation, optimization). Course does not lead to MATH 023, MATH 024.

Continuation of MATH 011. Introduction to integral calculus of functions of one variable and differential equations, emphasizing conceptual understanding and applying mathematical concepts to real-world problem. Course does not lead to MATH 023, MATH 024.

Concurrent Prerequisites: MATH 005 or MATH 011 or MATH 021, or equivalent exam

MATH 021: Calculus I for Physical Sciences and Engineering

An introduction to differential and integral calculus of functions of one variable. Elementary functions such as the exponential and the natural logarithm, rates of change and the derivative with applications to natural sciences and engineering.

Calculus of several variables. Topics include parametric equations and polar coordinates, algebra and geometry of vectors and matrices, partial derivatives, multiple integrals, and introduction to the theorems of Green, Gauss, and Stokes.

Prerequisite: MATH 022 with A- or better, or equivalent exam

(Courses with * are currently not scheduled to be taught.)

Introduction to numerical methods with emphasis on the analysis and implementation of numerical methods. Topics covered: computer arithmetic, solution of nonlinear equations in one variable, interpolation and polynomial approximation, elements of approximation theory, numerical differentiation and integration, and introduction to initial-value problems for ordinary differential equations.

Introduction to the basics of mathematical modeling emphasizing model construction, analysis and application. Using examples from a variety of fields such as physics, biology, chemistry and economics, students will learn how to develop and use mathematical models of real-world systems.

Introduction to the meta-theory of first-order logic. Topics include the consistency, compactness, completeness and soundness proofs for propositional and first-order logic; model theory; the axiomatization of number theory; Gödel’s incompleteness theorems and related results.